Ahnii! I previously wrote a command line utility named ‘packages’ which simply prints a list of project dependencies on the command line.

I found that I also often want to see a list of scripts in package.json, so I wrote another utility I’ve named ‘scripts’, observe: 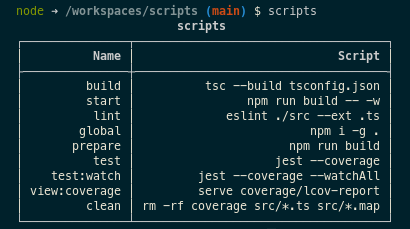 You can accomplish the same with ‘sed’, but it’s quite a command to remember, observe:

Check it out at https://github.com/jonesrussell/scripts or simply install it and try: